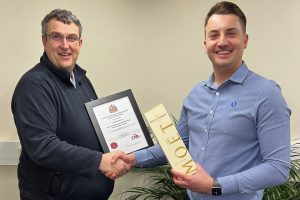 This success has secured Simon a promotion at TJ; he was previously a Transport Planner, but has now been promoted to the position of Service Delivery Manager.

This new role means that he is responsible for overseeing the delivery of scheduled services, from operations to customer service. He now looks after a team of over 40 people – three staff members on the operations side, a further three in customer services and around 35 drivers.

“I’m thrilled and a little shocked to have achieved a distinction if I’m honest! The pandemic definitely made the whole process harder as it presented a number of challenges along the way, but I worked hard and I’m pleased with the outcome. I’m now focused on using my newfound knowledge in my new role and looking at things from a different perspective.”

It was at a performance review three years ago that Simon mentioned that he would like to progress within the company. The TJ Management team were keen for him to do so and suggested some management training to ready him for promotion. The CMI Level 5 Apprenticeship was identified as the ideal course to equip Simon with the skills and knowledge he would need to lead a team.

As Simon neared completion of the apprenticeship towards the end of 2021, he was rewarded with the promotion which he commenced in October. This spurred him on to give the last few months of learning his all and his fantastic end achievement is testament to that.

The apprenticeship, which was delivered in partnership with PETA Training, Portsmouth, comprised 22 pieces of work in total – 8 assignments, 12 personal reflective pieces (whereby Simon was required to reflect on how he approached things in terms of time management, problem solving, communication, commercial awareness, etc). He also completed a project – for which he chose to focus on how TJ could reduce fuel consumption as a company – and finally, the End Point Assessment (EPA).

Simon undertook his EPA mid January and this involved two parts; a one-hour, 45-question exam, and a two-and-a-half hour Zoom interview with an inspector. The latter involved Simon delivering a 15-minute presentation, followed by a series of questions from the examiner about his portfolio as well as competency-based questions into how he’d deal with certain scenarios.

“TJ has been incredibly supportive throughout; they’ve enabled me to get all the on-the-job experience I needed to complete my assignments and portfolio, and equipped me with the tools I needed to be successful on the apprenticeship. They also funded the training, which is just yet another example of their commitment to the continuing professional development of their staff.

“This course has opened my eyes to a number of things that weren’t on my radar before and it’s enabled me to work in a more professional manner and equipped me with the skills to deal with management tasks that I didn’t previously have the experience to do. I’ve come out of it with a great qualification, which I hope TJ will utilise to its full extent. As the company continues to grow, I’m excited to see where it could lead me.”