TJ hosted a special visit at their Hythe Quarry site during half term, welcoming a local resident who shares the company name and loves everything TJ! Ten-year-old TJ Jones passes Hythe Quarry every day on his way to school and is fascinated with TJ, particularly their fleet of lorries. 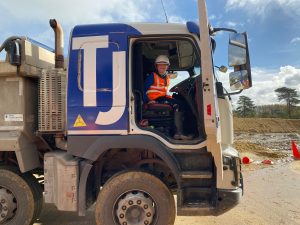 “Driving past the Quarry each morning is the highlight of TJ’s day. He loves the fact that he shares his name with the company and he eagerly looks for lorries as we pass. Most mornings a lorry is waiting to leave the site at the junction as we pass and TJ is so pleased when this happens as he loves seeing the TJ logo on the side of the vehicles.

“TJ has severe learning difficulties and sometimes has trouble retaining information, but when it comes to TJ, he never forgets! His enthusiasm for the company inspired me to do something for him, so I decided to get in touch with the TJ team to see if they would allow TJ to take a closer look at the lorries. I even sent in a picture TJ had drawn of the lorries, which he was very proud of.”

When TJ General Manager Luke Haskell discovered they had a top fan living locally, he was more than happy to facilitate a visit for TJ and Emma. Luke made all the arrangements for the visit and led the tour on the day. 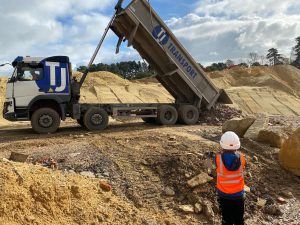 The visit started with a big welcome to TJ and Emma, with TJ being asked to wear a hard hat and hi-vis vest. Luke led the tour and took TJ and his mum to the Phase 1 area of the site, where digging is now complete and the process of refilling has commenced.

They then watched a lorry tip its load out and TJ was invited to take a short ride in the lorry from one end of the site to the other. Photos were taken throughout the visit and sent onto Emma to keep and print out as she wished.

“The entire visit was well organised and well thought out. They’d considered what activities would be fun for TJ and incorporated these into the schedule to ensure that he enjoyed himself. We were later sent a hi-vis vest for TJ to keep as well as the  photos which are great mementos of the most fantastic day. ”

TJ also met TJ’s owner – Terry John Higgins – and posed for photos with him in front of one of the TJ Transport lorries. It is an amazing coincidence that ten-year-old TJ’s name is also short for Terry-John, although his name is hyphenated whilst John is Terry Higgin’s middle name.  TJ (Jones) was named after his grandad who sadly passed away before he was born. 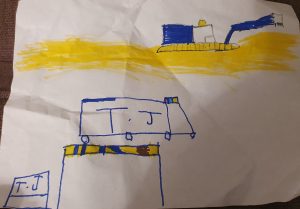 Emma says TJ often searches Amazon to see if they have TJ-themed toy vehicles for sale, but unfortunately there are no such products available. When TJ published some TJ lorry colouring-in pictures during the first lockdown period in the spring, TJ loved them and insisted his mum print out numerous copies for him to complete over and over.

“I’ve framed TJ’s hi-vis vest and plan to give it to him as a Christmas present. I’ve also ordered some of the photos to be printed onto canvases and these will be displayed in his bedroom. The visit has cemented in TJ’s mind that he really wants to work for TJ when he grows up. My thanks goes out to the TJ team who made our visit so special.”