You are here: Home / News / TJ to the rescue in QE Park fly-tipping incident

TJ to the rescue in QE Park fly-tipping incident 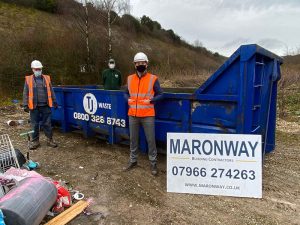 TJ has provided crucial assistance to help resolve a large-scale fly-tipping incident in the grounds of Queen Elizabeth Country Park, which was a significant eye sore and a potential danger to the surrounding environment.

The incident involved a lorry tipping a large load of mixed domestic waste into the park grounds after forcing its way through a padlocked gate unnoticed. After the vehicle had finished tipping, the vehicle became stuck and was unable to move, so the driver abandoned the lorry and fled into the Park.

The driver left a laptop and some paperwork in the lorry, which East Hampshire District Council discovered when they started their investigation. A couple of days later, the vehicle’s cab was set on fire and the Fire Service attended the scene to make it safe.

The burnt-out, abandoned vehicle was situated in a location that was visible to anyone visiting the Park or passing south along the A3 and the general public grew angry, launching a campaign on social media to find the culprits.

Within a few days the source of the waste was pinpointed along with the company responsible for transporting it. East Hampshire District Council is now following up these leads with the aim of securing a prosecution. 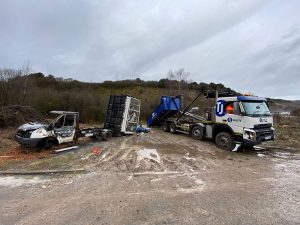 Oliver Marston of Maronway, a Petersfield-based construction company, approached the Park and offered to do all he could to help clear up the mess. He then got in touch with TJ, who as another local company – TJ’s Butser Quarry is adjacent to Queen Elizabeth Forest – were more than happy to help.

Oliver and Luke Haskell, TJ’s General Manager, came up with a plan to quickly resolve the problem, and within just a couple of days, all the waste and the burnt-out vehicle had been removed and the area left neat and tidy.

Luke said: “This incident has highlighted the national problem in the rise of illegal fly-tip incidents. Not only can it drastically harm the environment, but the cost of clearing up fly-tipped waste usually falls to local authorities and private landowners. I urge anyone seeking waste collection services to be certain on where their waste is being taken to and to stick to professional, established providers like TJ Waste.”

Find out more about Hampshire County Council’s fly-tipping campaign, learn more about the other fly-tipping incidents TJ has assisted with and discover the waste services TJ can provide your business with.

TJ approved as haulier for HS2 »